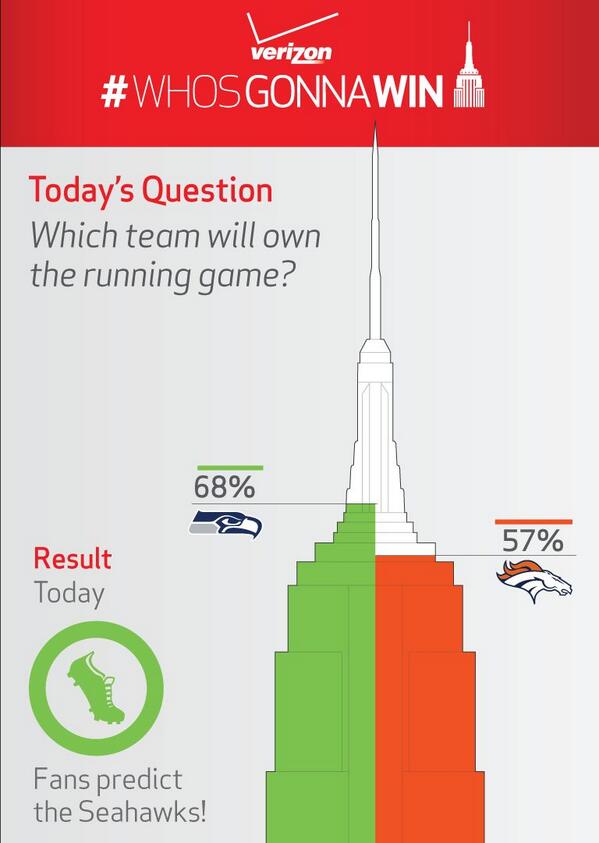 Nearly every night in NYC, the lights of the Empire State Building have some significance. Whether it’s lit up in tribute to Nelson Mandela or to show those in view of the city’s skyline that the NYC Marathon is happening, it’s an iconic piece of New York City. With Super Bowl XLVIII in the Greater NYC area (Metlife Stadium in East Rutherford, NJ) this year, Verizon created a gamified experience for all football fans to participate in. Each day of the week leading up to the big game, Verizon is asking questions of the crowd. Question 1: Which team will own the running game? Question 2: Which team will dominate defensively? Question 3: Which team will dominate the passing game? …and so on. People that want to play along just need to tweet their answers (either #Broncos or #Seahawks) along with #WhosGonnaWin to vote. The team with the most votes each day takes over the Empire State Building’s lights with their team colors. It’s a brilliant way to engage the fans and to get involved with all the Super Bowl activities going on in NY and NJ. There were over 13,000 tweets on the first day–Seattle taking the win with 68% of the votes. See the Infograph below about this gamification example and #GoBroncos!