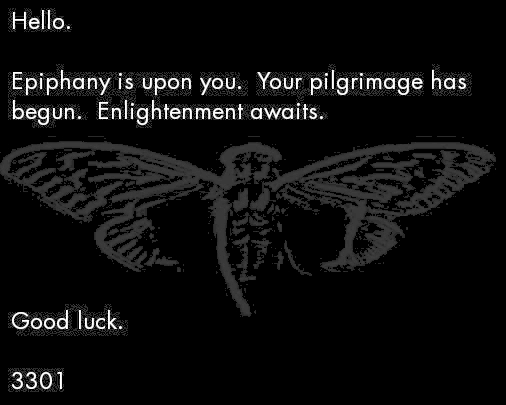 I’ve officially caught the bug this winter — infatuated with this fascinating online scavenger hunt, which has been unapproachable from the world of the average lazy human lacking cryptography or coding skills (that is to say, myself).

Cicada 3301, now in its third year, is a codename for both a covert organization and an online puzzle game popping up every January since 2012. This mysterious entity has been drawing hundreds of players into a vortex of exquisitely sophisticated series of clues without an explicit goal or end-time. This year’s first clue arrived on January 6, the Epiphany Day, when Christians celebrate the manifestation of Jesus Christ to the people in a human form. Cicada 3301 must think very highly of themselves, and so far most of us would agree.

Luckily, unlike the mystery TV show LOST, Cicada 3301 does not ask us to question the boundaries of time and space or the existence of purgatory. Tasks set by Cicada require very human skills of cryptography, steganography and programming, as well as the knowledge of computer networks, history, obscure literature and art, and math. Photoshop skills come in handy too, as they helped to disclose a hidden message in the first clue of 2014: Cicada’s logo, the moth-like insect.

While the first clues were relatively easy to spot, the level of difficulty escalates quickly, infuriating players who thought they were in for an easy paddle. 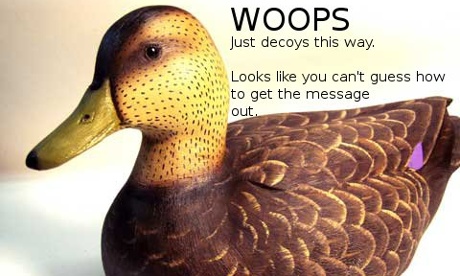 Bewildered players can attempt to figure out the clues by resorting to countless cascades of forum and chat threads outlining the solutions to the puzzles like the rest of us.

Cicada’s game mechanics involve decoding succession of maddening nesting doll clues of text ciphers, pictures with messages embedded via steganography, audio files, and pieces of art. The answers are usually letters, images and audio, their binary data sources continuously encrypted, reversed and mutated. The correct solution to every step is the key to the next clue. According to Cicada player @andr, clues feature a lot of Kabbalistic symbolism and cultural references to historical texts mixed with runes.

There are no points or leaderboards, as finding each new clue advances both individual players and groups of players working together. What matters is revealing the path of clues ahead. Players often tease each other with bits and pieces of information about the following levels to show off their progress. For most of the game, users are allowed to share their results so that the whole community benefits, but beyond a certain point users start receiving slightly individualized tasks and are prohibited from collaboration. However, at no point a clear indication of progress is given, not even when the game is over. It is, therefore, a highly collaborative game by necessity. Many players have to participate in order to filter out the misleading data, so that a few truly gifted individuals can advance to final levels and break out from the rest of the crowd in a strictly individual contest. The game could be over at any moment, as soon as someone finds the clue deemed final by Cicada 3301 designers.

What is the players’ motivation to participate in Cicada 3301? What is the point of the game that has no purpose? Responsible for Cicada’s mystery-infused virality is, most likely, people’s strive for meaning, status and social recognition, especially within the ranks of a highly-skilled, elitist group of Cicada “pros”.

Cicada 3301 initially attracts people through their urge to solve cryptographic and security-related puzzles “just for fun”. Further down the rabbit-hole, the clues that players unlock are hidden from the public internet behind a non-existent “.onion” domain host. This magnifies the sense of mystery and exclusivity, simultaneously offering additional player anonymity.

In its 2013 run, Cicada placed multiple physical clues around the world, requiring players to travel to see them or engage with people on location. Local involvement and participation further promoted Cicada, turning it into a global scavenger hunt reminiscent of alternate reality games (ARGs) – interactive networked narratives that use the real world as a platform to deliver a story. See “Why So Serious” and “Conspiracy for Good” for some of the best ARGS in recent memory.

A big part of Cicada’s appeal can be attributable to its clandestine nature. There has been no public information as to who Cicada 3301 members are and what their purpose is, except for a famous ‘leaked e-mail’ that the winners of the first Cicada allegedly received in 2012, ending the game for the year.

An e-mail supposedly sent to a handful of the first winners stated the following:

“You have all wondered who we are and so we shall now tell you we are an international group we have no name we have no symbol we have no membership rosters we do not have a public website and we do not advertise ourselves we are a group of individuals who have proven ourselves much like you have by completing this recruitment contest and we are drawn together by common beliefs a careful reading of the texts used in the contest would have revealed some of these beliefs that tyranny and oppression of any kind must end that censorship is wrong and that privacy is an inalienable right.”

The e-mail then invited the winners to apply for a place in the nameless organization by answering several essay questions very much in line with the beliefs expressed in the quote above. None of these winners have come forward to give the public more information on the organization.

Are Cicada 3301 what they claim to be – a no-name organization that is strictly legal, an initiative for a better future without censorship? Joel Eriksson, one of the players who solved all the puzzles in 2012, but was not fast enough to “win”, agrees with this view. He does not believe that there is a government agency or a private company behind Cicada. But can it be just a really elaborate hoax?

It might also be “so overt it’s covert”, as Sherlock said in Robert Downey Jr’s voice back in 2009. Cicada 3301 might the longest and most brilliant head-hunting campaign ever executed, made popular by its mysterious origin and allure of exclusivity, and collecting unique, identifiable data on players’ skillsets, usually known as resumes. After all, Cicada’s first message in 2012 indicated a search for “highly intelligent individuals”. 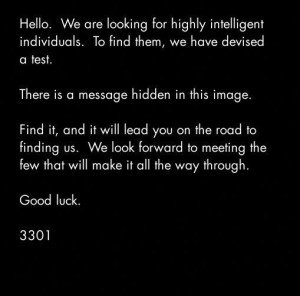 Many players’ long-term engagement with the game is driven by extrinsic motivation — the desire to join a mysterious (and, perhaps, powerful) organization that employs exceptionally smart people, a global undercover community of cryptographers and programmers. The puzzles are, then, just a way to get in.

Public and private organizations alike have used puzzles and contests in recruitment alongside resume screening and interviews since forever. The best companies are renowned for their tough “admission tests”, yet candidates almost always know what they are in for. For example, the Government Communications Headquarters (GCHQ), a British intelligence agency, employed a puzzle contest to recruit new talent in late 2013 that was similar to Cicada in its mechanics. It was, however, explicitly disclosed as an HR campaign. Google’s involvement in a less sophisticated public display campaign was not revealed until the puzzle was cracked, but it was just an addition to Google’s existing candidate screening process. The talent-discovery minigames of Knack, the US Air Force’s Airman Challenge, and Wibidata’s Portal 2 mod are all excellent recruiting games we’ve observed recently.

The third Cicada campaign has just entered its second month, and, as before, it does have a certain head-hunting flavor to it. What do you think – is it a remarkably clever way of recruiting the best and brightest or is it annual proof that the Internet is not all lolcats? 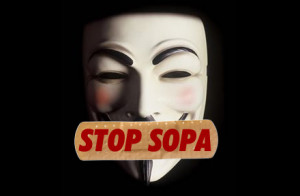 To prove our preoccupation with Cicada, let us recall that the two most famous government-level initiatives to censor the Internet – the American SOPA and the multi-national ACTA – were introduced to the public in October 2011, causing mass protests worldwide and effectively shelving SOPA. The first Cicada challenge began on January 4, 2012.

Perhaps you even recall a Wiki-less Wednesday, January 18, 2012, when Wikipedia, Google and a plethora of smaller sites announced a service blackout, to raise awareness about SOPA.

A couple of weeks later the first run of Cicada 3301 was over, informing the winners:

“We are much like a *think tank* in that our primary focus is on researching and developing techniques to aid the ideas we advocate liberty privacy security you have undoubtedly heard of a few of our past projects and if you choose to accept membership we are happy to have you on-board to help with future projects.”

So are Cicada 3301 champions of privacy and freedom of speech? I, for one, believe that there is no black-or-white answer to anything. All I know is that someone somewhere is currently fully engrossed in solving the individual Cicada 3301 2014 clues.