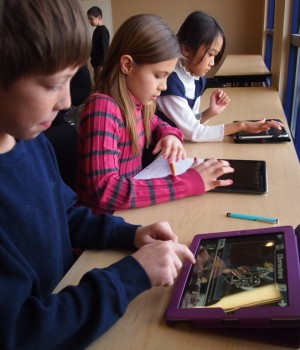 Games in education are nothing new. Because of their strategic nature that they share with subjects such as math, reading and writing, games have been used in the K-12 curriculums for decades. What is new is the use of a specific type of game for these subjects: the video game. This is especially the case with language arts. Like comic books, video games (including computer or PC games) in language arts curriculum have been controversial over whether they’re appropriate learning tools. This is because of the violent and seemingly trivial subject matter that video games have been stereotyped with. Besides this, its very graphic nature, moving pictures, has connoted the video game to be as mind-numbing as television has typically been made to seem. Like TV, the video game has been turned into an enemy of the traditionally more academic medium: the book. But these stereotypes are being broken more and more each day. Video games are showing capability of teaching the necessary literacy skills kids need to survive both in their studies and in the workplace later in life.

Lately, it has been shown that certain video games help children improve their writing and reading skills. According to Dr. Justin Marquis in his article, “Building Social Skills and Literacy Through Gaming”, “games [including video games] are very much based on the same sorts of narrative structures and conventions as traditional written texts.” Games such as Sim City and other world-creation games, especially role-playing ones that involve a lot of text in the narration, are both appealing in their graphics and special effects while requiring the players to read text and think for themselves in developing settings as part of the game. A Scientific American article states that “SimCityEdu, a version of [Sim City], is likewise a learning and assessment tool for middle school students that covers English, math and other lessons they need to master to meet Common Core State and Next Generation Science standards.”

Besides games involving development of reading and writing skills within the games themselves, there are also video games that inspire kids to read and write outside the game. According to Clive Thompson in his article at Wired.com, “Games, it seems, can motivate kids to read . . . way above their level.” He says this was proven in a couple of studies, one with middle school students and the other with 10th graders both of who played games like Minecraft. Although Minecraft is a more mathematical than literary video game, the results were that students would feel motivated to go out and read material that talks about it, including guides and advice books that show how to improve playing.

Thompson also says that kids who play these games improve in their writing skills because they participate in online discussions on the games’ sites. They don’t only improve their conversational writing skills but also their fiction writing ones. This is due to their drive for fan fiction based on these games’ characters. Thompson says, “Behold the teeming seas of Minecraft fan stories at sites like FanFiction.net . . . .”