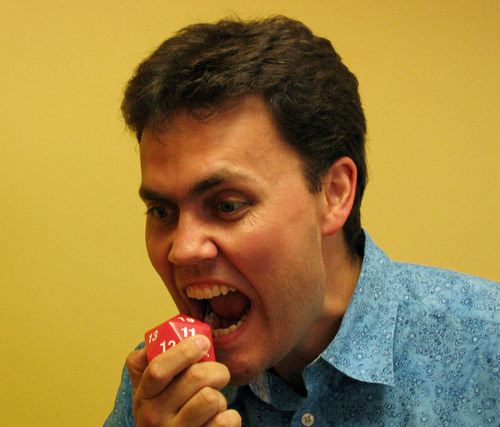 Jesse Schell is a Master Of Engagemeent

The moment a discussion about gamification dips into a deep discussion about game mechanics and what constitutes proper design, it seems inevitable that Jesse Schell’s book, The Art of Game Design: A Book of Lenses becomes mentioned as the official reference to prove someone’s point. Jesse’s long history of working as a game-designer has earned him numerous accolades and his position as the CEO of Pittsburgh’s largest videogame studio.

Having been the former Creative Director of the Disney Virtual Reality Studio,  the former chairman of the International Game Developers Association, and being named named one of the world’s Top 100 Young Innovator by MIT’s Technology Review, Jesse knows how to make a damn good engaging experience and is teaching as a professor at Entertainment Technology at Carnegie Mellon University. As a man well-versed in the idea of engaging audiences, Jesse’s expertise extends into gamification pretty significantly.

As it turns out, the principles for designing games have more or less become the framework for designing everything and by virtue of logic, Jesse is damn good at designing for well, everything!

The ability to engage with all audiences with games is what has earned Jesse’s spot as one of the keynotes at GSummit SF 2013. In his featured talk, Jesse will explain how gamification is merely just a small part of the overall movement to influence all of society with the power of games. His talk will detail some of his design principles and ideals to maximize motivational design for a number of different experiences.

You can expect to learn:

To get a hint of Jesse’s design prowess, be sure to watch him as the next featured guest on Gabe Zichermann’s Gamification Revolution starting at 1PM EST, on Monday, January 28.