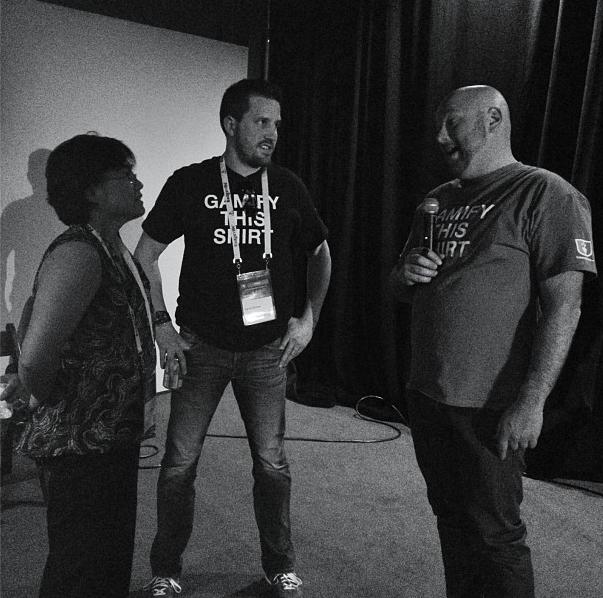 GSummit has something for everyone. On Wednesday, upstairs in room 3 the events all revolved around the how’s and why’s of design. In case you couldn’t attend GSummit, you were at another room, or you want a recap of the events and you were there, here is the summary of the events in Room 3.

By taking cues from MMOs and strategy games, Boinodiris created a plan to boost employee engagement. Gaming and simulation can be a medium to relay complexity; a difficult subject can become much easier to understand through gaming and simulation. Boinodiris believes that the future of gamification requires historical data to custom curate experience, improved collaboration, and virtual and physical rewards based on historical data.

Nir made it very clear that it’s difficult for someone to be productive and ambitious when they’re not engaged. In order to make a consumer engaged in your product or message, you need a hook – an experience designed to connect a solution to the user’s problem with enough frequency to form a habit. The best method to hook someone is defined by the acronym ATARI:
A – A hook as 4 parts:
T – Trigger
A – Action
R – Reward
I – Investment.

For those interested in seeing a detailed slide presentation, you can access Nir’s slides by going to “OpinionTo.us”, filling out a small survey, and then seeing the slides in full.

With many competing dating sites, it’s difficult for one to stand out and become dominant. Grindr is a very focused, clean, and efficient app for gay men struggling with their identity. Scott Lewallen discusses the following methods to enhance an experience.

1) Have a purpose to solve a problem to help people with their daily lives.
2) Create addiction – embrace a human’s natural vanity and love form themselves.
3) Control: Allow users to block whoever they want so they can feel safe and comfortable.
4) Collect: A ‘favorites’ system for people to engage with later i.e. people to talk to in the future.
5) Plant seeds: Make users invest something to harvest later
6) Kills words: Less is more.
7) Find your voice: Speak to your audience – they are listening.
8) Show it don’t say it: A picture paints a thousand words
9) Create a visual language: Buttons to represent notifications, favorites, etc.
10) Make your users happy: Happy users are loyal and loyalty is priceless.

With those 10 steps you can gamify whatever your want with ease!

Gaming, media, and technology have all drastically changed in the past few decades. Gamers rarely sit and play as player 1 and player 2 on the same console as people have moved to virtual parties and social games. The best way to reward customers is through direct currency such as airline miles and iTunes cards. Rewards also should follow the simple formula of “spend $X and get Y reward”. Suchit’s key to success is instant redemption and instant delight.

There are times when a company takes a risk and it works out well, and sometimes it doesn’t. With Scruff’s “blue dot” system many members of the dating app became more engaged and interested, but turned off others. Although there was a proven amount of increased traffic and engagement, the negative feedback from dejected users caused many other problems.

Can a game help America out of a recession? Priva Haji believes that by gamifying your finances a person could easily game their way to a lesser debt and a fuller savings. For ever $1 saved or $1 of debt reduced a person earns 1 credit. These accumulated credits can lead to prizes like instant win prizes or a $2 million jackpot. Simple rewards like a game or prize will lead to organization of finances, asset growth, and education. Priva’s plan for the future is to work with other financial institutions to create personalized track options.

7) Play for a Cause Workshop
Gabe Zichermann

Brainstorming doesn’t always need to be a month long, tedious process. Gabe’s workshop to promote “solving real problems for real people.” Given any problem, a group can brainstorm to solve a problem in less than an hour. Here’s how:

1) Working individually – 3 minutes. Write down aspects of the problem, write each aspect on a separate note card. Example: writing ‘this issue is too costly’ on one, and ‘this issue is too time consuming’ on another.
2) Work in pairs – 12 minutes. Put all the note cards in the center of the table and shuffle them up. Pull one card out of the pile and use that card as inspiration to come up with an idea to solve the problem. If the first card isn’t inspiring then use another. Example: using the money example from #1, say “we have many places where we could cut costs and still be efficient.”
3) Pairs share their idea with other pairs involved – 2 minutes for each pair to share their idea, then a few minutes at the end for all people involved to discuss and decide on a favorite. Example: If a pair uses the money saving idea above, the entire group involved could agree that saving money is an object worth pursuing.

The example used here reflected a real problem described by Rebecca Wang at “A Billion+ Change.” A Billion + Change is  national campaign focused on getting companies to join their campaign to promote pro bono volunteer work.

Room 3 brings designers of all sorts and backgrounds to explain how gamification can be used in any situation. From redefining how a company problem solves to creating a leading mobile app, gamifying an idea can have amazing results. If using gamification in design interests you then be sure to check tomorrow’s events for more ways to create revolutionary ideas.