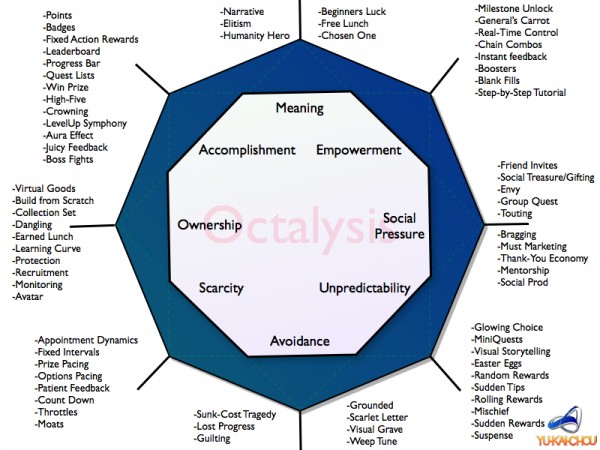 Speed Camera Lottery is one of the best gamification examples

About the Author: Yu-kai Chou is an experienced entrepreneur and gamification pioneer who has been working in gamification since 2003. Yu-kai is the creator of The Beginner’s Guide to Gamification Video Series, and is a regular keynote speaker at conferences and lecturer at organizations like Stanford University and Google Inc.

One of the most famous examples in the gamification world is The Speed Camera Lottery of The Fun Theory. The basic idea is to encourage drivers to obey the posted speed limits by making it fun to do.

Originally proposed to the The Fun Factory by Kevin Richardson of San Francisco, the concept was implemented by the Swedish National Society for Road Safety on site in Stockholm, Sweden in November 2010. Using existing traffic-camera and speed-capture technologies, the Speed Camera Lottery device would photograph all drivers passing beneath it. Each vehicle’s speed was displayed to the drivers passing by and recorded by the system. Speeders would be photographed and issued a citation, with the proceeds going into a cash fund. Drivers who obeyed the speed law would also be recorded and entered into the lottery, where they would be eligible to win some of the money from the speeders.

This case study has been seen by almost everyone within the gamification industry, but how can we learn to create an innovative solution like this by ourselves for our own projects? The answer for that is to dig deeper into the motivating factors involved by examining the project through the Gamification Framework Octalysis. Problem: get people to drive safely

In every gamified campaign, one must first define the problem to solve, and how to measure success. If we take the problem of slowing down traffic as an ongoing campaign, we can analyze it with the 8 Core Drives of Octalysis.

Generally speaking, driving slowly is only motivated by Epic Meaning & Calling (Core Drive #1): driving safely and responsibly is for a cause greater than yourself. This has definitely caused many people to put some sort of limitation to their driving speed, making the roads safer overall.

Nonetheless, some people don’t always equate fast driving to “dangerous” driving. For many, ignoring the speed limit is still worth it if it can grant them immediate gratification of arriving to their destinations sooner.  So the government introduced Loss & Avoidance (Core Drive #8): fining people for driving over the speed limit. People want to avoid getting fined for fast driving, so they will lower their driving speed. This is what deters most people from driving dangerously.

However, because the odds of getting caught are relatively low when one speeds, it still doesn’t stop as many people as needed from speeding. It also gets everyone to walk the line of being exactly at (or sometimes slightly above) the speed limit, which is not ideal.  (In more extreme cases, traffic flow tending towards uniform higher speeds will inhibit safe maneuvering, such as in the case of lane changes and transitions to and from other thoroughfares.)

Subsequently another solution was introduced: Empowerment of Creativity & Feedback (Core Drive #3). I’m sure you’ve seen those speed detectors that don’t really fine you, but merely tell you what speed you are going. Since the user is in control of his/her “score” and sees feedback immediately, this encourages many people to slow down even more when they see that they are over the speed limit. The Win-State was always clear to the user, but now he/she has a better feedback system to heighten their awareness. But that’s still not enough.

1. Ownership & Possession (Core Drive #4): With the SpeedCam Lottery, a player can now potentially “earn” money if he scores well and achieves the win-state. In this case, the tangible reward of cash is itself a fairly strong motivator.

2. Unpredictability & Curiosity (Core Drive #7): Whenever there is a lottery or sweepstakes system, it involves this Core Drive. A 10% chance of winning $100 will motivate people more than a 100% sure of winning $10, because they will be continuously thinking about whether they will win or not. This anticipation makes things more fun and engaging.

3. Development & Accomplishment (Core Drive #2): While the generic speedcam above shows you your score, it still requires you to think whether you made it below the speed limit or not, and after the “Hmm, I think it was 65 mph. I’m at 63.” your mind just says, “Check.” But with the Speedcam Lottery, there is an obvious green thumbs up when you achieve the win-state, and a red thumbs down when you fail to achieve the win-state.  (This was further reinforced by displaying speeds at or below the limit in green, while speeds in excess of the limit were displayed in red.)  That builds a stronger endorphin shot in peoples’ heads. It’s like the offline way of saying, “Congratulations! You just earned a thumbs-up trophy!”

4. Social Pressure & Envy (Core Drive #5): This is a bit unexpected, but as you can see in the video, the Speedcam Lottery was implemented on a busy street, with lots of other drivers and passengers present. Beyond just internal drives for accomplishment and wanting to win money, the driver would acknowledge that everyone around would be able to see if he is getting a thumbs up or thumbs down. Even though it is likely that the great majority are strangers, the driver still doesn’t want them to see him get a thumbs down, motivating him to drive slower and ensure that he accomplishes the win-state.

With 4 extra Core Drives (and hitting 7 out of the 8 Core Drives in total) to motivate people towards a certain win-state, it’s no wonder how the SpeedCam Lottery was able to reduce the average speed of passing drivings by over 20%.

Through Octalysis we are now able to see how a creative approach using existing technologies can produce a solution which provides incentives to encourage  positive driver behavior in a fun, engaging way.