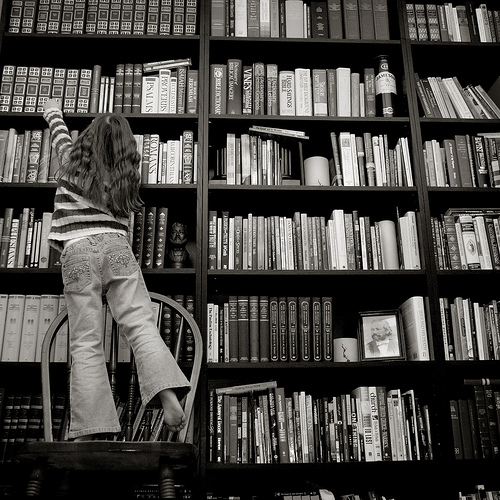 A way to understand intrinsic motivation for gamification with RAMP

A lot of talk in gamification turns to the relative values of Extrinsic rewards vs Intrinsic Motivation.  It often seems like a conversation about good and evil.  I have been guilty of this many times in the past! The truth is that both have their place, but intrinsic motivation is where longevity and true engagement will come from.

With that out of the way, what is intrinsic motivation? Chambers.co.uk gives us the following meanings for intrinsic and motivation;

Intrinsic – belonging to something or someone as an inherent and essential part of their nature.

Motivation – to cause or stimulate (a person) to act; to be the underlying cause of (an action)

So, intrinsic motivation is a drive that comes from within, not from external (extrinsic) sources such as rewards.

There has been a lot of research done on this over the years, the most famous of which was a summation of over 100 studies done my Edward Deci and Richard Ryan. They used this to create their Self Determination Theory where they identified the following three things as intrinsic motivators.

Another favorite text that is spoken about a great deal is Dan Pink’s Drive. He talks about three very similar intrinsic motivators to Deci and Ryan.

For me personally, this gives us four key motivational drivers that can be used  as foundations for all good gamified systems. 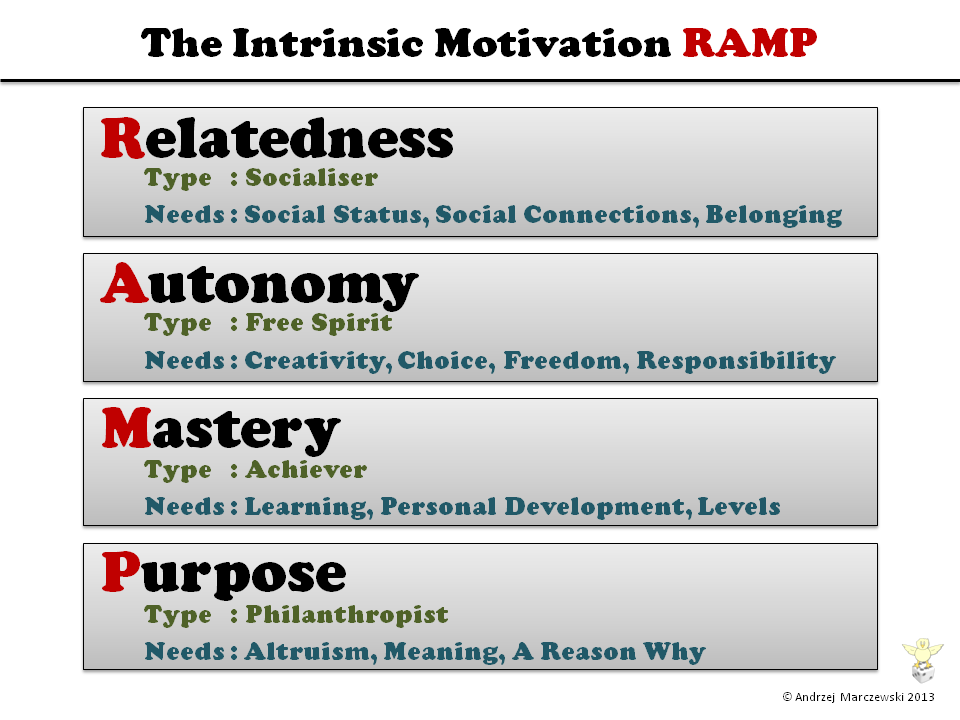 Relatedness is the desire to be connected to others. In gamification it is covered by things such as social status and connections that come from communities.  When I first started looking into gamification, this was something that I really didn’t take into account. However, now I feel that this truly is the glue  that will hold together and elevate a gamified system above just being another gimmick. When the badges have got boring, when the points are meaningless – if you have a community that enjoys their interactions with each other, you will retain their engagement and loyalty.

The sense of belonging and being connected to other people is very underrated. When you feel that you are part of something and create relationships, that is much stronger than any digital reward you may get from posting an article to twitter!

Within the enterprise this is found in internal social networks as well as the office. I mentioned social status as well. This may seem like an external force, and to a certain extend it is. However, status can be a very personal thing. Feeling that others value you your input or your experience is a very motivational thing. You don’t need a leaderboard to feel that, you need to have connections with people and some way to get those people talking and sharing and giving each other feedback.

Autonomy can be seen as a few things, but the core concept is that of freedom. Most people don’t like to feel that they are being controlled or stifled. Without some level of freedom, you will struggle to cultivate innovation and creativity. Google recognised this when they implemented their 80/20 rule. Their employees were encouraged to spend 20% of their time working on their own projects. This led to some of their most important innovations, Gmail and Google News being two well known graduates of this way of thinking! You could also look at this in terms of meaningful choices.  Do you have the freedom to choose how you will learn something for instance? Are you able to choose the path that best suits your needs or learning style or are you forced to do it one way or no way?

Giving users a level of autonomy will help them to feel that they have at least some control of what they are doing. In an enterprise situation (for example), it is the difference between micromanagement and leaving your employees to get on with their job in the way they feel is best. It shows them that they are trusted and can not only give you happier people but may also surface some great innovation.

Mastery is process of becoming skilled at something, to mastering it. It is important to us that we feel our skill is increasing in direct proportion to the level of challenge. If this is perfectly balanced it is often referred to as Flow.

The path to mastery is important is a concept that is often seen in video games.  Rather than being given a manual to read, you are taken through training levels that spoon feed you everything that you need to know in order to master the game. During this on-boarding phase, the challenge is increased as your level of skill increases. Once you are out of the training levels, this does not cease. The game still continues to get harder as you get better at it.

In 2008 Malcolm Gladwell popularised a concept know as the 10,000 hour rule with his book Outliers. This states that the key to mastery of a task is to spend around 10,000 hours of meaningful study and practice of that task. In working life, this represents about 6 years.

In an enterprise situation, it is important to consider that if you do not continue to challenge employees, then they will begin to feel less motivated. In the same way, if you do not encourage them to improve or even change their skills over time this likely to happen.

Purpose can be seen as our need for there to be meaning to our actions. We want to feel that when we do something, there was a reason and that it may have some greater meaning.  A very well known example of this can be seen in Wikipedia. Millions of articles, all given freely, for no other reason than to feel that they may add to better understanding of the topics.

Many people talk about altruism when speaking of purpose, putting the welfare of others ahead of your own in some way. This could be giving to charity, answering peoples questions on a forum (Quora for example) or just opening the door for another person.

In enterprise you can consider this in a few ways.  The first is giving people the ability to provide meaningful help to others via forums. This links in well with relatedness when you look at internal social networks.  Many people like the idea of helping their colleagues when they can. Another option is to give people the opportunity to give to charities from within gamified systems, especially in point collecting style platforms.  Rather than getting just a badge, give them the chance to donate to a charity of their choice when they hit certain thresholds.

The pretty – or at least functional – picture

Every good gamified system will have one or more of these intrinsic motivators present in some form or another.   This is not to say that extrinsic rewards are of no value, far from it.  They can be used as a great way to reinforce and support motivation – maybe the start of another post?