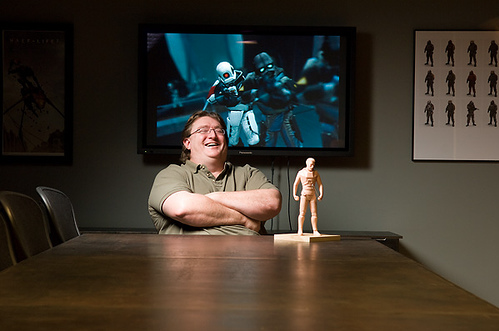 Valve Corporation has a lesson to teach about innovation: original ideas aren’t cheap

Michael Abrash wrote a blog entry on the Valve Blog about how he got to work at Valve and recounted an interesting story about Gabe Newell, the CEO of Valve.

In the early 90’s, Gabe, then a Microsoft employee, commissioned a survey to see what was actually installed on people’s PCs. To Newell’s surprise, the most installed software actually was not Windows. Windows was only in second place at the time. What was the first? First place actually belonged to to id Software’s Doom video game. It was at this time Gabe left Microsoft to start Valve, one of the best video game development companies in the nation. They are the creators of the famous Half-Life and Portal series. They also have their own online game distribution platform called Steam, which has over 50 million users.

Gabe started Valve because he found the results of the software survey to be very telling. How could dozen people in their mid-20’s manage to get their software installed on more PCs than the product made by the largest software company in the world? Simple. The nature of productivity has changed. The honeymoon period for the Industrial Revolution was over. The revolution that changed the way we viewed growth and scalability was the same revolution that has treated each person as a component to a bigger part, only requiring the employee to do the same thing over and over again.

However, Doom’s success has shown that doing the same thing twice is almost pointless because there is no value produced the second time. Take Facebook or Twitter for example. Many programmers could write scripts to create Facebook, Twitter, Angry Birds, you name it, but they won’t achieve the same success because all the value comes from the first, creative act.

This means, the Industrial Revolution way of doing business—the hierarchical management—is obsolete. This old paradigm of productivity focuses on doing the same thing over and over again, only changing with small increments. Innovation is bottled-necked at the top of the hierarchy, assuming that those at the top have better, more disruptive ideas than other employees. However, that isn’t always the case. With the workforce now seeing employees bring their own electronic devices, everyone is a valuable information worker. Each employee is capable of producing your company’s disruptive technology or service

So what did we learn?

So…how do you define the g-word? After all, this industry is fast growing but still relatively new. Customers and employees are tired of getting points and badges for completing tasks, being ranked on leaderboards for performance, and spending time playing games that are all similar to each other. If YOU find new ways to motivate and engage target audiences, then YOU will bring a lot of value to your company. As Valve says, “First mover dominates.” Are you going to the one of the first-movers in this new industry?