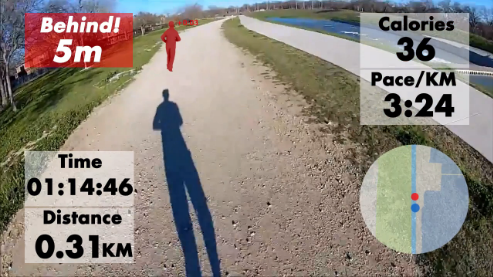 Looking for more reasons to justify a purchase of Google Glass? How about getting the ability to race against your virtual ghost? Race Yourself (formerly GlassFit) is a London-based startup that just raised over £100,000 in seed funding to bring this gamified exercise concept to Google Glass.

In racing games like Mario Kart, ghost racers are often implemented to give players an opponent to race against, without actually having them in the race itself. Race Yourself will use Google Glass’ augmented reality to bring this exact functionality into running or biking through a variety of minigames.

Runners and bikers will be able to project themselves onto paths, race against themselves, and even run away from a virtual horde of zombies to make the exercise experience more engaging. Race Yourself will also include social features to race against friends and a collection of badges to earn as well. 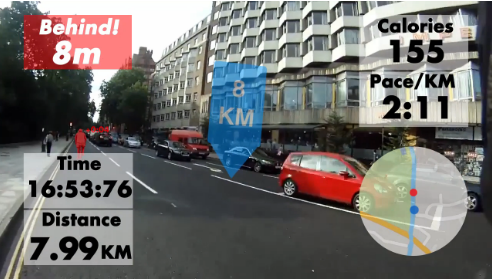 According to TechCrunch, co-founder Alex Foster aims to “…make exercise incredibly addictive and enjoyable through augmented reality exercise experiences on, primarily, Google Glass. We are offering similar promises; more motivation, tracking, competition… but visually and live, that is, the user knows if they are beating or falling behind their personal best or target pace the whole way through the run.”

This is the approach all gamified exercise apps are taking but what’s unique about Race Yourself is that they seem to be taking a Free to Play (F2P) model to monetize their application.

Race Yourself will be released with “over a hundred games and feature upgrades” that can be unlocked by burning calories, beating personal records, and maintaining long streaks of exercise. According to Foster, the better these games and features will be, the more difficult they will be to unlock and Race Yourself will presumably charge you for boosts and shortcuts to access those special features. He also has stated plans to sell heart rate monitors and speedometers that will require special features for use.

Approaching a fitness app with a F2P model seems counter-intuitive as the founders are relying on users to pay them in order to access their best features, which undermines the idea of making people exercise more in the first place. However, given the remarkable success of F2P games like League of Legends and Candy Crush, it’s not a surprise that they would try.

Race Yourself is aiming to coincide its release with Google Glass and will be releasing a Kickstarter in the near-future.

Check out Race Yourself for all their latest updates.