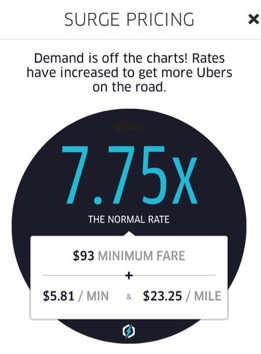 This past weekend, there was a mild snowstorm in NYC. As it happened to be on a Saturday night during the festive holiday season, demand for transportation was extra high, and on-demand ride services like Uber jacked their prices up by as much as 7x. Users were outraged, the media took notice (featured image courtesy of that Gawker post), and Uber has something of a public relations problem on its hands as a result.

Through a series of heated debates in social media, I realized that many people fail to understand the behavioral economics of demand-based pricing. The arguments mostly divide into two camps: “Uber has the right to charge what it wants”, and “this sucks, they are abusing us.” Both parties – as usual – are right, but in order to do demand based pricing well, you need to understand some basic BE concepts.

Obviously, airlines, hotels, car rental companies and game developers use these principles extensively, but there is no reason they can’t (or shouldn’t) be applied outside those industries.  These are especially relevant for gamification practitioners, so I’ve put them together into my top five tips:

1. Reset or Remove the Anchor

Anchor pricing refers to a perceived “correct” price for a given good or service. Once the anchor is set, all other prices are compared to the anchor. For example, if you are first shown a shirt for $300, then a comparable shirt for $150 looks like a good deal, whereas a $150 shirt on its own might seem expensive. In much the same way, you have two choices with the anchor: start high and offer an option that’s cheaper (e.g. Uber SUV is 7x, but Uber Black Car is only 3x) or hide it entirely. If you’ve ever looked at the list of “standard” prices on a hotel room door, you’ll always feel like you got a great deal. The latter is the model that airlines/hotels/car companies use by constantly varying their prices so you never really know what a given flight should cost.

Either way, Uber’s standard price is transparent, and its surge price is transparent, so people feel like they are getting a bad deal. Which they are – obviously – but there’s no need to rub their noses in it, especially when their demand for transportation is inelastic at that moment. They feel like they have no options, are being gouged, and are suitably angry. No surprises there.

2. If You Do Demand Pricing – Always Do It

Demand-based pricing isn’t something you can turn on and off without creating friction. Once you’re committed to a demand-based model, you need to run it all the time. Otherwise, users will simply be trained to avoid your product during times when the demand-based model kicks in, and alternative providers will use this against you. The reason for this is partially to “keep customers guessing and checking in” about what prices will be at a given time (maximizing lead gen), but also to raise the face validity of your system. If the customer believes that supply and demand are super elastic, and you’re responding to market demand in real time, they don’t blame you for constant fluctuations in pricing as much. But if you only respond to spikes and never to decreases, you are an opportunist.

Consumers obviously prefer that prices are stable in general with small, semi-predictable increases like inflation over time, but if they have to be variable they should be variable. The simple corollary to my point 1 above: you need to create opportunities for people to feel like they got a great deal during the low period because they were smart. Uber’s approach ensures that no one feels good about the price ever.

Whatever the function that goes into making the price rise or fall should definitely be obfuscated from users. Not only will this reduce their sense of just how much you are taking them for a ride (when you can), it also reduces their ability to game the system by building a simple understanding of your model. For example, hotels will never disclose occupancy data easily on a given night. If you knew what their occupancy really was, you could negotiate the price based on understanding the perishability of their product (e.g. an unsold room is lost revenue, 90% is their corporate target, etc). Without that data, the customer cannot easily predict what their optimal outcome should be.

The same goes for your competitors – the more understandable your model, the easier it is for them to compete with you. For example, if Uber’s 7x fare increase is predictable for a snowy Saturday night at midnight, their competitor Lyft could respond by raising fares only 3x. Although this is still a huge increase in revenue for the company and its drivers, they could position themselves as a hero to consumers and a relatively good deal compared to Uber (see anchoring above).

4. Give People an Out (Virtual Currency)

When the price of a demand-based service gets too high, people naturally look for alternatives. Most of those alternatives involve competitors, but what if you could keep customers with you by providing them with another means of payment? This is one of the roles that virtual currencies play – a safety valve in a time of great need or friction.

Most airlines for example offer an “anytime award” using their points. This redemption typically uses twice the normal number of points, but ensures that a consumer can get any seat on a flight they want, even when loads are very very high. Airlines have become experts at using this approach to reduce point balance liability and move unsold seats. Although consumers are loathe to part with the extra miles, if a flight from Boston to San Francisco shoots up to $1500 at the holidays, suddenly 50,000 miles doesn’t seem like such a bad value (compared to $300 and 25,000 miles during a low season).

In fact, the pure economics of such a move are neutral to the airline assuming it knows the demand curve for the particular flight. But the most important thing is the consumer perception: suddenly the miles are a super good deal (even though they are not) relative to the options presented. If Uber had a gamification strategy, a night like Saturday would have been a great time to take a lot of UberPoints (or Membership Rewards Points) off the books, while not paying drivers that much more for the rides given.

The first rule of demand pricing club is you don’t talk about demand pricing club. One obvious playbook item from airlines, hotels, rental car companies and the like is that they don’t talk to consumers, the media or anyone about demand-based pricing. The model is simply their model – and that’s how it works. They certainly don’t attempt to sugarcoat (read: lie) about what the purpose of their model is. Customers know that the purpose is revenue maximization and open conversations about the approach are few and far between.

Uber – in keeping with the oft-misguided, libertarian valley model – has decided to spin demand pricing as a way of getting more drivers on the road to serve customers. But everyone knows this is a weak assertion at best. Drivers’ fixed resource is their time (they should not be driving beyond safe working hours), and what they want is to maximize revenue in the time they are working. Any small increase (even 15%) should be sufficient to lure them to an Uber job, since it’s instantly more money than they would be making somewhere else. Even a simple algorithm that ensured they drove empty as little as possible should be sufficient to drive supply.

But demand-based pricing isn’t about supply (Uber’s mistake), it’s about demand – plain and simple. The goal is to maximize revenue and satisfaction from the customer while optimizing a perishable good or service. In order to do that effectively however, you need to have a grounding in best practices, relevant behavioral economics, and an over-arching gamification strategy that makes the customer feel as good about their choice as possible.

Otherwise, you’re trading short-term cash for long-term loyalty – at your own peril.