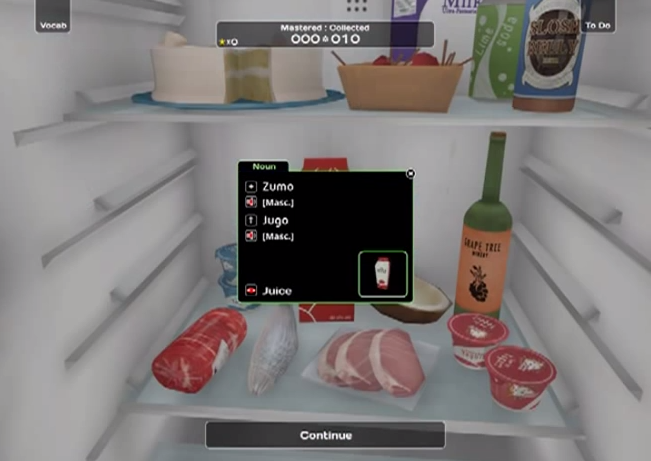 If you’ve ever attempted to learn a second language, you might have found yourself overwhelmed by this apparently daunting task, or even worse, got yourself disengaged because of the dryness of traditional textbooks and lecture formats they are conveyed in.

Don’t give up just yet! There are a couple of game-like methods out there for you to diverge from the traditional learning setting. This year during GDC week, Influent was released. Aimed to be a “Language Game Redefined”, the game enables players to have a self-directed learning experience, immersing them in a 3D house, fully furnished with a rich amount of everyday objects that can be interacted with in the chosen language.

The game begins with you gaining control of a main character in a 3D house, and every object you can find can be clicked on to show your chosen language’s pronunciation, it’s written form in the native alphabet (if applicable) and how it’s pronounced in a latin alphabet.

Once the player has added 10 objects to their vocabulary list, the game tests if they learned it by challenging the player to find those objects under a time limit. After finding them, the game considers those words “learned” and then unlocks adverbs and verbs that are directly related to the nouns the player was just tested on.

“Allowing the player to learn the parts of speech in this order, they will have a better grasp of how to use the words they’ve learned in complete sentences” (Howland, R., Olmstead E., Hoshino, J.. SanjigenJiten: Game System for Acquiring New Languages Visually, 2012)

The developers don’t claim that the game will teach you a language from the ground up, but instead that it acts as a supplement for learning languages. Having the primary focus on entertainment, they designed the game to contain elements such as a collection system, scoring, rewards and a storyline with character development. They also wanted to use the retention capability of role playing in games and mimic the same cognitive process a native child that learns by image association, this is a technique also used in Rosetta Stone courses, where sound and image are combined to teach vocabulary.

The creation of this game was inspired by the creator’s learning habit of taping flash cards on his house’s objects and to aid learners of the digital native generation and visual-spatial learners that store information through imagery and have difficulty engaging in the same environment as auditory-sequential learners (learning through sound).

To check out other forms of language learning, try the free DuoLingo app! it is a gamified learning application (for web and mobile), currently supporting English, Spanish, French, Dutch, Portuguese, Turkish, Italian, Hungarian, Romanian, Japanese and Polish. All those courses are offered in English, Spanish, German, Portuguese, Italian and French.

As we mentioned previously, through the platform, you can develop your language skill tree, now with a revamped and addictive interface packed with game elements like scoring, health points, unlockables and power ups. Beyond that, the platform is equipped with voice recognition, for you to train not only the sound and writing, but also pronounciation.

For more options, check out our posts on Babbel and Memrise and choose what best fits your learning style. Now that you’ve got the tools to diverge from traditional, teacher-centered learning, combine them and make your learning experience diversified.

Let us know what language you’re learning and what you find helpful and motivational in the process!