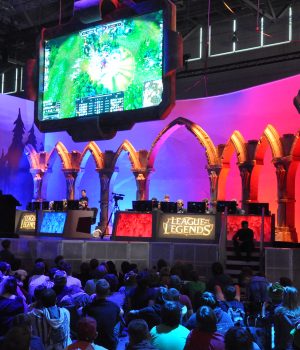 For those unfamiliar with the term”MOBA”, it may be time to take notice of one of the fastest growing phenomenon within the gaming industry. MOBA’s, or Massively Online Battle Arenas, have greatly surpassed other popular gaming genres to become the most played games on the PC platform. This shift in the trends of PC players began in 2012 with the game title League of Legends, which has retained its throne ever since; with other MOBA’s such as DotA 2 and Smite creeping into the top ten as well. These types of games have become so popular that they are selling out seats at large venues as well as being covered by major sports networks like ESPN.

Yet the most fascinating aspect of the MOBA game is how players interact with each other. Team work is paramount within a MOBA. The basic premise of any match (which generally take anywhere from 15 to 45 minutes) is the players choose their “heroes” or avatars to battle as, each one with drastically varying powers and skills, and two teams must fight to conquer the enemy teams home base. Various roles must be filled by each player to achieve victory. As in most environments, positivity and teamwork trump negativity and anger, yet emotions can be tough to control while in the heat of a difficult crisis. MOBA’s like League of Legends have implemented systems to improve relations among players as well as weed out poor attitudes. These systems incorporated within the game have shown a stark reality: Constant encouragement and restraining frustration in the face of adversity drastically improves winning percentage.

Riot games, the developer for League of Legends, posted a video in 2013 regarding the statistics of teams who worked together against teams which suffered internal strife. A match in which all players rallied together despite early setbacks had a 54% win rate. A match populated with three angered teammates resulted in a 46% chance of winning, with the number dropping with each subsequent frustrated player. Using player history, Riot games also discovered that individuals that demonstrated positive behavior would win an average 10% more games. Conversely, players with negative report histories averaged to win 35% fewer games. The big statistic Riot games claims is that players who behave in a sportsmanlike manner win 1.7 million more games than the average player on a daily basis.

MOBA’s are now going out of their way to encourage this sportsmanlike behavior.  League of Legends in particular has developed an honor system to promote positive behaviors among gamers. Aspects of this honor system include: acknowledgment of a friendly player, letting a player know their advice was helpful and even an option to let an enemy player know that their attitude was appreciated. These accolades of honor were developed by cognitive psychologist Jeffery Lin, who heads design of the social systems within League of Legends. Other MOBA’s are beginning to follow suit, offering encouraging words on loading screens regarding teamwork and understanding. While not as nuanced as the honor system, it is clear that developers and players are recognizing the correlation between working together through issues and success.

In a world where anger oftentimes results in the ruination of the best intentions, it is admirable that game developers as well as gamers themselves are taking note that to achieve victory in the virtual space, a positive attitude is integral. As the most played PC game in the world, consumer engagement in these team support exercises will undoubtedly have an impact on its players outside of the game. An encouraging word can go a long way in shifting attitude.