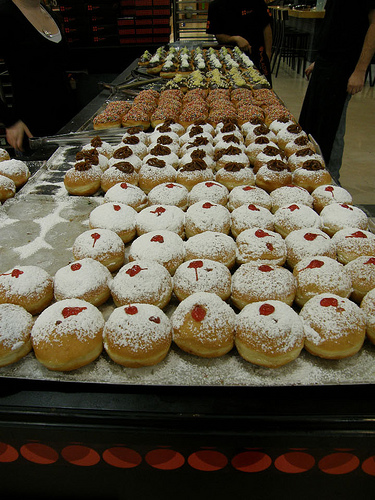 As I prepare for the first night of Channukah tomorrow, and Gamification Co. prepares for our gsummitX Israel MeetUp in Tel Aviv on December 25th,  I’ve been contemplating a new addition to the SAPS model:  Let’s put an F out in front of that acronym!

For I ask you, is there a more powerful motivator than..Food?

For just one of these sufganiyots I would give up whatever esteemed Status I have, and refuse Access to the gold in Fort Knox. And the Power to control the universe wouldn’t compare to the taste of my aunt’s homemade latkes, and opening a new iPad mini as a gift after dinner would, frankly, just seem anti-climactic.

Food is so powerful a motivator that during the gamified Channukah experience known as Dreidel, Jewish children have alchemized their monetary rewards into food – the coins we play for are literally made of (not always appetizing) chocolate!

I haven’t run this by Gabe Z yet, but figuring he’s the largest food pornographer in the world after Martha Stewart, I’m almost sure he’d be on board.

I can just picture him moving GSummit 2013 from the Concourse Exhibition Center to La Taquieria. The severe lack of space would be a tiny sacrifice to make in order to debut the newly remodeled FSAPS concept in devine epucirean fashion. Attendees, speakers and staff would be too busy stuffing their faces with burritos to notice they have literally no breathing room!

while food may motivate food-lovers like myself during the holiday season, it doesn’t work for building a large-scale universally playable game experience.

In his book Gamification By Design Gabe Zichermann points out that sex is actually the most powerful motivator of all. It’s a fact every ad executive and marketer knows all too well. However, it also the most unreliable means of engaging people because of what I call “the Lincoln problem” – a game designer can’t please all the people all the time. In order to please all the people some of the time, and some of the people all the time, gamification designers rely on a rewards cycle that’s not based on something that often comes down to a very personal fetish or flight of fancy. A similar issue would arise with using good as a reward. In addition, the relationship the player has with food could suffer as a result, and some might be encouraged to eat more than they should through this method.

Still, I remain undeterred. An FSAPS model just makes sense.  I will go anywhere and do practically anything for some tasty food. Like the comedian Greg Behrendt, I would go anywhere for the possibility there might be cake:

What do you think? Is food the most powerful motivator? What meal can motivate you like nothing else can?

Have a Happy Channukah!