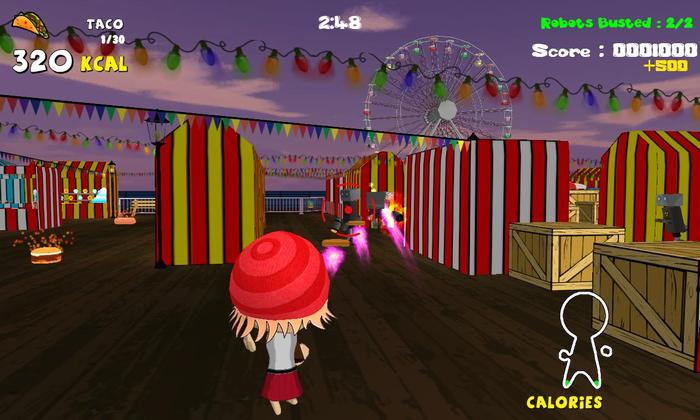 Food fights in the cafeteria are usually not well-liked by adults. Virtual food fights that promote education about food, health, and wellness is a totally different story.

Fooya is a third-person, single-player food fight game meant to replicate the childhood activity. FriendsLearn recently used KickStarter to raise money to expand the game with a multiplayer expansion of the current single-player version which will be titled Fooya with Friends.

The expansion is meant to create “…a global food fight to combat humanity’s health crisis caused by greedy junk food profiteers” says the creator, Bhargav Sri Prakash. “While this new level of engagement promises to deliver a hugely exciting experience for gamers, Fooya with Friends will continue to fight against the global health epidemic of obesity by producing a fast-paced environment that not only entertains but also subconsciously educates about the dangers of a bad diet.”

In the single-player Fooya, you control a character from a third-person PoV and launch unhealthy foods like burgers and fries at your enemies to enlarge them and make them immobile. Meanwhile, healthy foods are used to improve your character like health potions in role-playing games. The more you move the more calories you burn as well. Is it just me, or does this idea sound a lot like the way people should be eating and living?

The game has already received national media coverage in India due to its Reciprocity Wave public art competition, with a goal to raise awareness about heart disease, diabetes, and other diseases traced to diet and lifestyle. FriendsLearn co-organized this competition in Chennai, India on March 9th. Over 400 artists competed and created paintings, sketches, collages and posts, all to publicize the issue at hand.

“Fooya is not an educational game by any means, but learning in the subconscious is built into the whole learning experience” says Andy Lee, director of technology at FriendsLearn. The game as a whole is meant to encourage players to rethink their choices when eating, mainly when regarding fast food and other high-calorie options.

When scare-tactics and physical education in school don’t always get the job done with preventing and fixing obesity, it’s time to change the battle plan. Gamification has had noticeable effects with other aspects of learning, so why not combating weight problems? A food fighting game with fatty foods as the bad guys just might be able to save the day.