Yesterday Apple revealed iOS 7, the latest version of its operating system for mobile devices. The update was greeted – as usual – by thunderous applause from the company’s legions of fanboys and with vocal derision from pro-Android bigots. In the midst of all the hoopla and traded social media barbs, one thing seems glaringly obvious: Apple is out of ideas, particularly for business users.

To be clear, this iOS update is beautiful, and it borrows heavily from Windows and Android to polish up many of the interface issues that previous versions of iOS have had. But for every pretty, flat screen that Apple showed, there was at least one major feature that the company punted, ignored or just dismissed. While they could have been out in front demonstrating technical leadership through advanced software design and breakthrough features, the Jonny Ive-led software group is — unsurprisingly — more interested in flash than substance, and continues to be tone deaf to customer needs.

I’ve long-argued that Apple is bad at software, especially anything having to do with web services. They’ve done just about everything possible to prove me right – especially for business users – shooting themselves squarely in the foot with most non-OS software launches in the past 2-3 years. With iOS 7, their weaknesses appear to be spreading to the core operating system. Consider these six critical software solutions that Apple either missed, punted on or designed exceedingly poorly:

Theft of iPhones is a massive industry in the United States. Each device comes with a unique device ID and serialized carrier chipset that identify it unequivocally. Because Apple users generally must register devices with Apple to use its services (like the App Store), the company pretty much knows who owns what device at all times. Stopping theft entirely would be trivial if Apple simply made it a requirement that past owners had to “unlock” devices for new owners with a short time-delay. The company could also “brick” (or permanently disable) any device that was reported stolen. Either of these approaches would vastly curtail the market for theft and save lives, but Apple has no economic incentive to do so. After all, rich folks have to replace each one of those millions of missing phones, and the company can’t afford to do without the revenue. So, they punted, lauding an anti-theft feature that is disingenuously designed to thwart law enforcement’s ire. Sure, the new approach will deter data theft, but device theft is the bigger market, the bigger headache (especially now that everything’s in the iCloud) and mortal danger. They could solve it if they wanted to, but they very clearly have no interest.

It’s no coincidence that Google announced the purchase of Waze – the hugely successful gamified traffic application – right around the iOS 7 launch, highlighting the stark difference between the companies’ strategies. Apple’s Maps, which launched last year to a colossal thud, replaced Google’s super effective mobile mapping system with a half-baked, amateur and dangerous McGyvered solution that barely functioned for most users. In the time since, Google has been aggressively iterating mapping, rolling out a new design, bolstering the businesses you can find, integrating social information and reviews from Zagat, improving voice recognition, and now including the top traffic wayfinding system. In the year since Apple’s CEO acknowledged the major mistake they made with Maps, the world’s most valuable company could have figured out a way to compete effectively with Google or at least brought back their competitor’s app as an option on the platform to make up for their mistake. Instead, the company chose the “middle road” yet again – saying and doing nothing substantial with this essential mobile feature, forcing their users to pay the price. Meanwhile, they are no closer to a true Maps API or service, meaning third parties can’t effectively build on the platform. 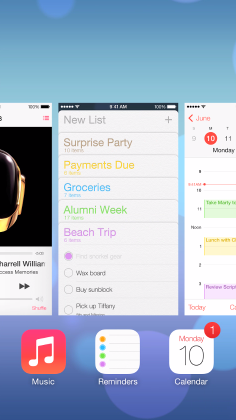 The company revealed a new way to switch apps in iOS 7 that integrates some of the look and feel of its competitors. The double-click and swipe modality will undoubtedly make the process of task-switching that much easier. However, Apple didn’t deliver the two most important features that would have greatly improved the productivity of almost every iPhone user: true multi-tasking and kill-all apps. Today, the operating system has a complicated (and largely secret) way of handling memory and processor usage between apps, relying on push notifications to handle elements of background processing. However, most users can’t effectively use or control multi-tasking. There’s no way for us to turn on or off multi-tasking capability, some apps can download/upload in the background while others can’t, and if we want to kill every open app at once (to save battery life, minimize bandwidth, roam or troubleshoot), we still have to do it manually, app by app.

While Apple users tend to be among the wealthiest and most traveled consumers, the company continues to pay very little attention to its most global customers’ needs. If you want a second SIM card slot (to change carriers while traveling and save a fortune on roaming calls and data), you’ll need to get a phone from Verizon or Sprint, and there’s no option to switch via software. Moreover, the company offers no way to selectively throttle international data, letting you choose which apps can roam (e.g. iMessage, email) while turning off those that shouldn’t (Skype, Spotify) to save money. The proposition today is “all on or all off”, and the roaming data management system Apple uses doesn’t allow you to set alerts or warnings about excessive data use – you must depend on your carrier telling you. All of these things make the iPhone needlessly complex and grotesquely expensive for global travel when it should be most customer friendly.

The company’s messaging protocol makes it theoretically free and easy to send short messages (like texts) between Apple devices, and the blue bubble has become a staple of users’ experience. But while SMS was a battle-hardened protocol that is capable of delivering your message in the middle of a rock concert, hurricane-based blackout or with 1% battery life remaining, iMessage has been a major step back in reliability. Messages frequently appear to go out but languish without warning, leading to many hilarious and unfortunate situations. At the same time, iMessage’s potential is thwarted by being strictly limited to Apple products only, offering no integration options for the enterprise, third party apps or other platforms. Moreover, email search continues to be mostly broken, and Apple has done nothing to advance true social media messaging integration into the OS beyond quick tweet and FB post access. Instead of the pretty redesign, Apple would have made a lot more people happy (and much more money in the long run) by applying its design genius to fixing the inbox once and for all, bringing together SMS/iMessage, email, Facebook, Twitter and corporate messaging into the ubiquitous smartphone. But heck, that broken email still looks pretty. 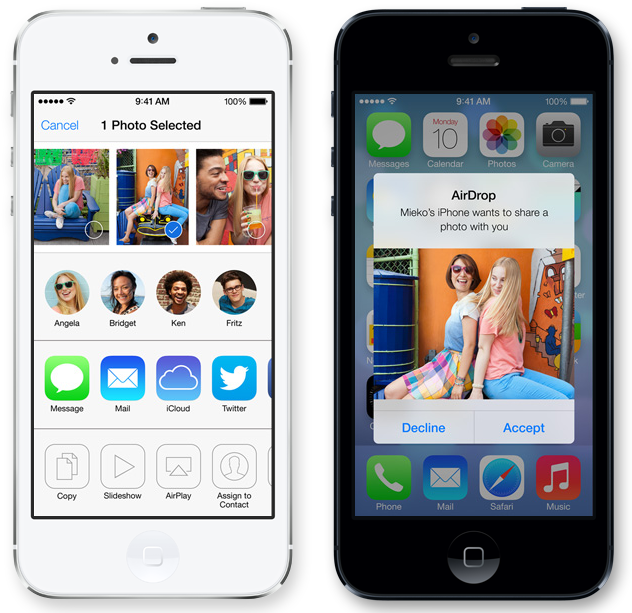 Apple’s quick networking protocol, Bonjour, revolutionized the way that devices can quickly and easily share information across a local network. Since launching as Rendezvous in 2002, Apple has pushed this protocol to all its products, and the new AirDrop for iOS makes use of the concept to make it quick and easy to share files with other iPhones and Macs. The only problem is that bonjour is blocked by many corporate firewalls and data filters and doesn’t work with non-Apple devices. So good luck using those fancy, simple features at your next conference or with a PC/Android colleague when you need to share files. And while you’re at it, have fun working with files – a still-missing feature in iOS after all these years. The bottom line: Apple has done nothing to advocate for (or fix) Bonjour compatibility and security to satisfy the networking industry, all but ensuring that many of these features will continue to be the province of the coffee shop instead of the corporate network.

There are – of course – many more software innovations that Apple could have introduced with iOS 7, including breakthroughs that I can’t even yet conceive (like mobile payments, NFC, third party authentication and biometrics, etc). The company also could have spent some time fixing iTunes instead of launching a half-baked 1940s concept (radio! Thank heavens for the WPA!). Also, they might have considered unifying the App iBooks and iTunes store, done something major with online education, made subscriptions work consistently for newsstand or any one of a number of things. But ultimately, the road they took is the Ive-sans-Jobs path: pretty, refined, mildly interesting and safe.

That may be enough at RIM or Microsoft, but for Apple – and its pro users – it’s nothing but a holding pattern.