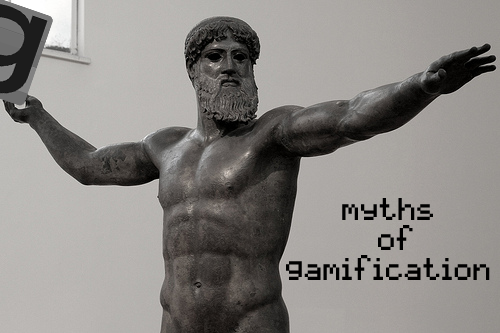 This is part one of a four-part series covering some of the main myths surrounding gamification as seen from game developers’ perspective. You can read the other parts here.

One of the biggest ideological debates in the games industry today is about the role, meaning, value and place of gamification. There has been almost every kind of discussion, from polite to threatening, political to academic and expert to amateur. And while the arguments and syntax vary, they seem to always end up in a place familiar to contemporary American culture: the religious ideological war. In fact, what we’re witnessing is more of a schism than an outright battle, and my sense is that both disciplines will ultimately be better for it.

In order to contextualize the discussion, I want to lay out the Top Four biggest mistakes, myths and misunderstandings that game designers have about gamification, and how they can improve their comprehension. At the same time, I want to help explain how gamification designers can benefit from accepting criticism through a meaningful filter that can be useful to advance the art and science of engagement.

Game design is an unaccredited profession that emerged as a self-described discipline in the latter half of the 20th century. Its practitioners need not have any grounding in the social sciences, “hard” sciences or math in order to work professionally. Although many game designers are among the most brilliant systems thinkers in the world, they need not study systems engineering or process design to practice their artform, and their design frameworks are rarely rigorously tested against real world models to establish their efficacy. The practice of game design is largely experientially driven, and the great majority of its models are based on observation like sociology: “we observed players doing this, here is our inference about the reasons.” Over time, those inferences become models, complex interactions are reverse-engineered (mechanics, dynamics, aesthetics) and a logical system is inferred.

That isn’t to say game design isn’t super important and meaningful work – but making a game isn’t the same as specifically designing engagement systems to change behavior. While they are related, experience in one doesn’t automatically make you an expert on the other. Great game designers have humility and a clear-eyed vision of their craft, its value and purpose, and don’t assume their work is immediately relevant in other disciplines. As examples, see my discussions with Richard Bartle (Interview, GSummit Talk) and Nicole Lazzaro (GSummit Talk). Both of these famous game designers have built models that are widely used in games and gamification, and — significantly — they understand the limitations of applicability from one sphere to the other. The need for us to learn from game design, but not hew exclusively to it, is why legendary creators like Will Wright and Jesse Schell are featured at GSummit 2013, for example.

One of the biggest (but by no means only) stumbling blocks is narrative. Great game designers are often distinguished by their interest in — and capacity for — development of great narrative structure. A great deal of the rich history of digital games is based on this premise, and even when the stories weren’t deserving of a pulitzer (see: Donkey Kong), they played a critical role in framing and shaping the experience of the user. This belief in the primacy of narrative has caused friction between hardcore and social games in the past as well, but attitudes may be shifting — particularly if this interview with legendary designer Shigeru Miyamoto is any indication. Of course, in gamification, the narrative typically belongs to the user and the brand they’re interacting with (if appropriate). This means that gamification designers must strongly avoid the temptation to insert a new storyline for users, eschewing princesses, dragons, zombies, vampires and the like. Rather, they strive to expose ways for them to interact differently with the stories they already care deeply about.

Over the last few years, I’ve met many great game designers that have transitioned from entertainment games to gamification, either partially or completely. Any one of them worth their salt will tell you that game design expertise was super valuable, but there is still a steep learning curve to make gamification work. This is mostly because great gamification is rarely about “making something into a game” — in fact, this approach is usually the kiss of death (see: most examples in change-oriented games for social good).

Game design is a core foundation of gamified design, but it’s only one of three elemental disciplines — the others are loyalty program design and behavioral economics. Each one of these verticals has its own unique view of how to create and sustain engagement. While they borrow from each other liberally, they are often dramatically at odds. For example, a plurality of game designers believe that points are non-motivating, rather simply a way of tracking progress and taking action. Conversely, loyalty program designers believe points are very motivational. Behavioral Economists would assert that the kind of point (and its redemptive potential) determines its power.

This basic disagreement simply highlights the differences between the thinking and approach of Game Designers and Gamification Designers. The latter use a broad palette, and measure their success through the transformation of user action/behavior. The former typically are experts at developing entertaining experiences that measure their success through direct sales. From the outset, their intent is different, their training unique and views on core mechanics divergent. There’s a lot to draw from game developers in gamification, but absolute truths aren’t one of those things.