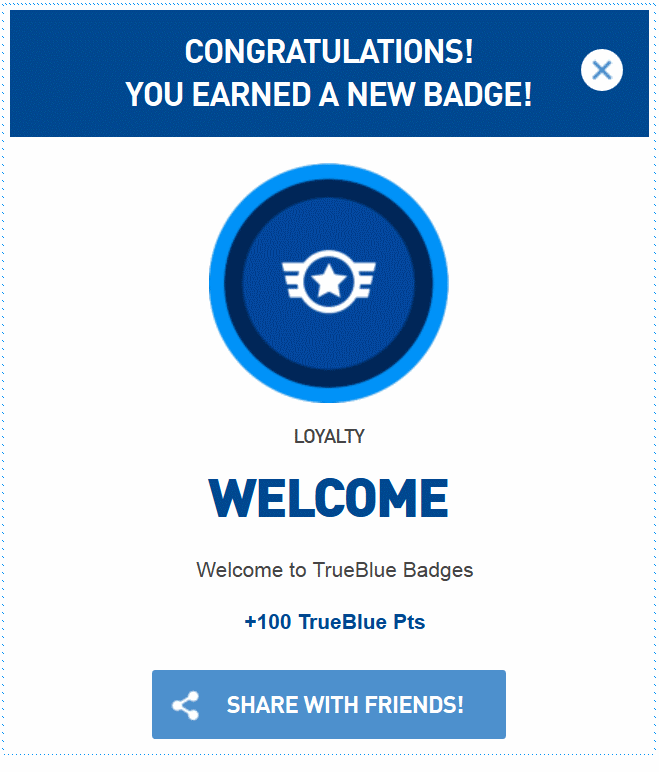 Below is an article from Comarch, one of our Gold Sponsors at GSummit SF 2014. Join us at GSummit this June 10-13 in San Francisco as we discover the secrets of engagement science together! Also, hear from Comarch’s CEO, Jerry Filipiak in his talk about “The Internet of Things: Using Technology to Engage”–where Jerry will be diving more in depth about their work with client, JetBlue.

Gamification is not exactly a new concept. The term itself has been rapidly growing in popularity as of late, but its core elements have existed for thousands of years. While it is hard to imagine the ancient Greeks compiling points in attempt to level-up or claim the top position on a leaderboard, they were indeed using gamified concepts. When it came to the Olympic Games – games being the keyword here – the glory of winning was certainly a coveted prize, but the ancient Greeks also used olive-leaf crowns and other material prizes to incentivize athletes to compete. 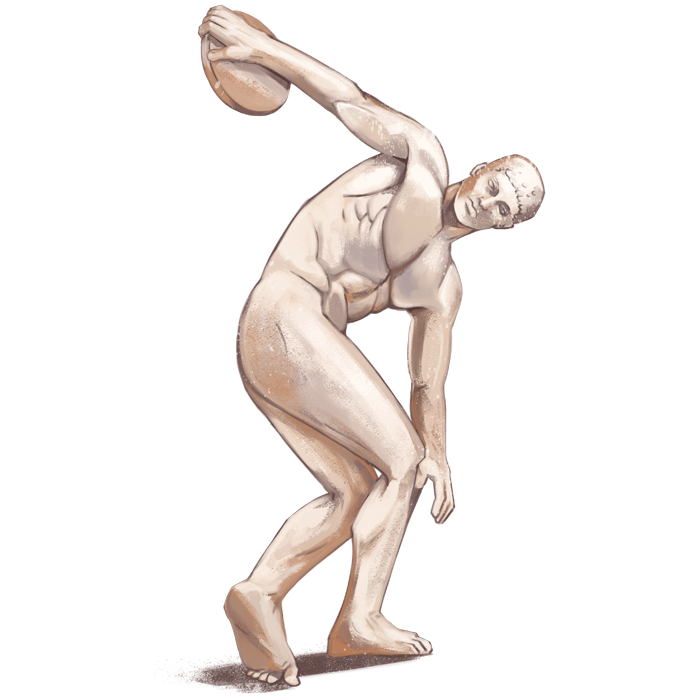 Winners of the Games had statues of themselves displayed at Olympia – think of this as a leaderboard. A one-time winner would have his name featured on a generic male statue bearing no resemblance to his unique appearance or features. If an athlete were to compile three victories, however, he would have a bronze or marble statue sculpted exclusively to his likeness – an achievement for leveling up. Clearly, gamified elements were used in ancient Greece, but whether or not that is to be considered gamification plays into the ongoing debate over the term’s definition and implications.

In a recently published Gartner research document, “Redefine Gamification to Understand Its Opportunities and Limitations,” analyst Brian Burke recognizes the fact that gamification is widely misinterpreted, largely due to the lack of a clear and accurate definition of the actual term. In an attempt to clarify gamification and its capabilities, Burke and Gartner have redefined gamification as “the use of game mechanics and experience design to digitally engage and motivate people to achieve their goals.”

Burke acknowledges that many businesses and organizations have long been using game-like methods to motivate customers or members – take the ancient Greece example from above. However, what has been missing in the past is the digital aspect: the ability to apply all of this through computers, smartphones and other devices. This digital aspect, Burke points out, “is what distinguishes gamified solutions from predecessors that used very similar methods to motivate people.” 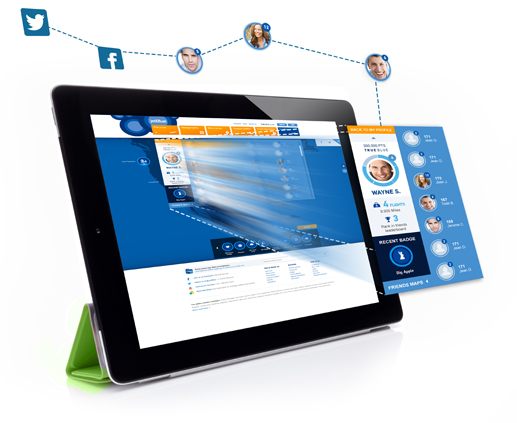 While Burke explicitly cited Nike+ and Khan Academy as notable platforms using gamification as Gartner defines it, he noted that there are definitely others that have successfully implemented gamified solutions as well. Keeping that in mind, the success of JetBlue’s TrueBlue Badges program is worth analyzing in the context of Gartner’s recent gamification research.

Badges was added on to JetBlue’s existing TrueBlue loyalty program by Comarch in late 2013. Like so many other organizations, airlines were using gamified elements long before gamification became a household term. Airlines have been rewarding customers since the ‘70s, with frequent-flyer programs now an industry standard.

All frequent-flyer loyalty programs, in accordance with Gartner’s core components of gamification, use points/miles and they all seek to “motivate people to change behaviors or develop skills.” Likewise, airline loyalty programs are constantly looking to align goals of the flyers with the goals of the airlines, creating a mutually beneficial relationship that instills loyalty and incentivizes additional transactions. So why are other airline loyalty programs not considered to be examples of gamification, and what makes JetBlue’s program so gamified? Similar to Burke’s conclusion, the key lies in the digital approach. 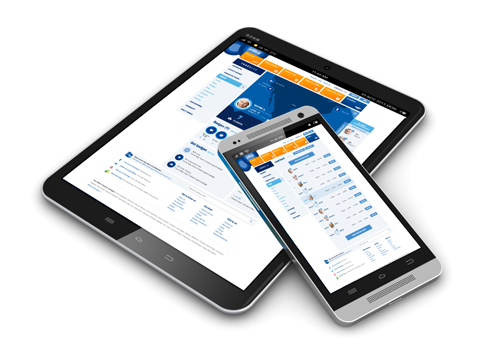 With Badges, JetBlue was looking to differentiate its loyalty program from the many others that exist, and it did so by fully committing to gamification through a digital platform. The Badges program rewards TrueBlue members with digital badges – which often come along with additional reward points – for completing various tasks such as booking flights, flying to particular destinations, interacting with the program’s partners and sharing activity via social media.

These badges are noticeably different than the typical point- or mile-accrual system that other airlines use for loyalty programs. Members can not only admire their badge collection, but as they earn points, they can also view where they stand on both a global and just-friends leaderboard, which ranks position based on number of badges, flights and miles flown. With all of that in place, JetBlue undoubtedly cares about the experience design – defined by Burke as, “the journey players take with [gamified] elements” – of its Badges program as it continues to differentiate its program within the industry.

In the Gartner document, Burke states that gamification “engages players on an emotional level,” while loyalty rewards programs typically do not. That being said, the story of JetBlue’s relationship with TrueBlue member Paul Brown further establishes the airline’s successful use of gamification. Considering the fact that Paul compares his relationship with JetBlue to the one in the movie Her – which depicts a man falling in love with an operating system – he certainly seems to be engaged with the program on an emotional level.

With 81 badges earned, 42 flights and more than 65,000 miles flown, Paul is No. 1 atop the Badges leaderboard. And on Valentine’s Day 2014, he had quite the unique interaction with JetBlue, earning a one-of-one badge and reestablishing his emotional connection with the program in the process (see images below) – read more on that here. 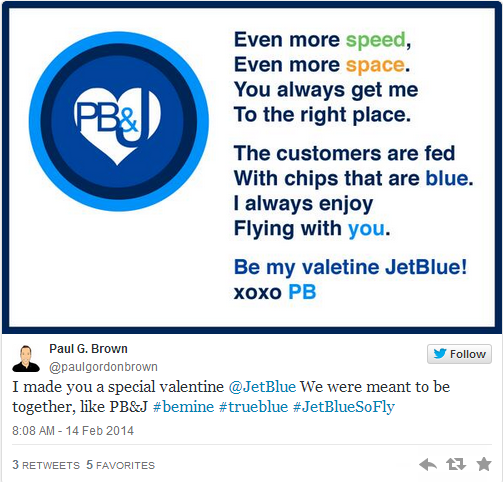 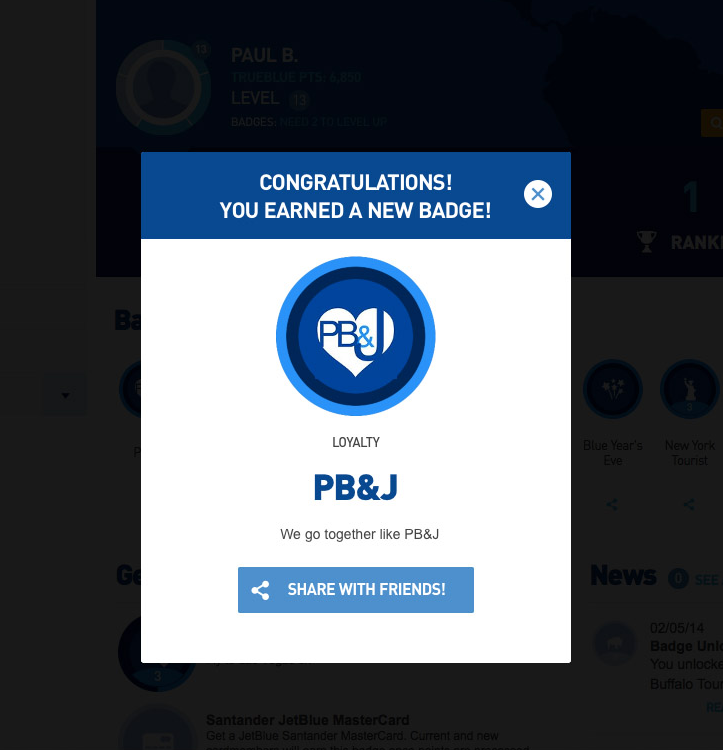 Through this digital engagement, JetBlue offers over 300 different badges, simultaneously deploying authentic gamification, rewarding its members, fostering loyalty and incentivizing future interaction – and the open-ended gamification design of the loyalty program creates endless possibilities, evident by Paul’s custom badge. As Brian Burke points out, though, it is essential to first understand the meaning of the actual word gamification before effectively utilizing it. Aided by Gartner research and successful implementations like JetBlue’s, we are moving ever closer toward a loyalty industry greatly enhanced by gamification.