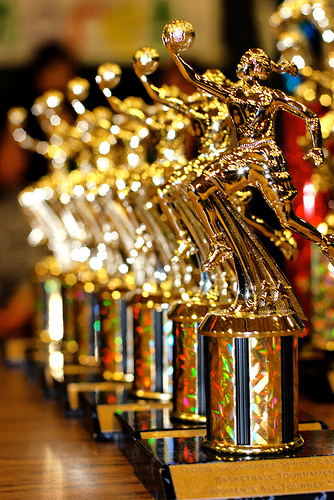 This week, Ashley Merryman (co-author with Po Bronson of two books on motivation) wrote a startlingly misguided op-ed in the New York Times entitled Losing is Good For You. The title suggests that the author was going to dive into the teaching power of failure (which is amazing). Instead, it’s a thinly supported screed against “rewarding kids for just showing up,” and judging from the comments it’s touched the Lazy Millennial nerve as well. While the authors deserve creative credit for creating a new middle class bogeyman in the form of the “Trophy-Industrial Complex”, the rest of the article is full of intellectual leaps that might leave parents and educators with the wrong impression.

Let’s get the easy (and correct) stuff out of the way first: many classrooms and organizations give out awards to everyone who participates. And it’s also true that if you give kids a reward for an intrinsically-motivated behavior, then remove the reward, it extinguishes their drive to engage in the action (the overjustification effect). But what’s startling about Merryman’s piece is when she suggests that using participation trophies necessarily leads to giving out too many rewards – these things are not mutually inclusive. More to the point, rewards for just showing up are actually quite valuable.

In the official Gamification Design Certification curriculum, we talk about the right way to extrinsically reward users of a system, in a model that is based on the best practices from games, loyalty and behavioral economics. What we know – from the success of games as varied as Farmville, Grand Theft Auto and Angry Birds – is that the first period of user interaction is incredibly important. This “onboarding phase” – which can be as short as 60 seconds – is when the user is most likely to leave an experience. If that first encounter lacks success, positive reinforcement, clarity of purpose and emotional connection, it’s unlikely that the individual will persevere. So even if the activity might later become intrinsically rewarding, bad onboarding will prevent people from ever finding that out.

Any parent who’s ever tried to get their kids to try something new understands this dynamic well: sometimes you have to bribe and cajole for a little while until kids get the hang of it and realize they like it. If you’re still bribing them after 6 weeks of playing hockey, perhaps it’s not for them. But without some external positive reinforcement at the beginning, the next Gretzky might never discover the love of the sport for themselves.

This is where participation trophies come in. When used correctly, a reward for “just showing up” is delivered once near the beginning of an experience as a way of keeping the user moving forward. It’s also an important training step, showing the player the kind of rewards they can expect in the future, the method of their delivery, and what kind of reaction they’ll get from their peers. Called achievements in game parlance, these rewards are then meted out in more measured ways. Rather than being given out for every action thereafter, good gamification design encourages the delivery of achievements at increasing levels of challenge and difficulty.

If we were giving out trophies for every action, Merryman’s primary concern might have some merit. Receiving a badge or reward for each minute, meaningless step would be likely to trigger overjustification and kids’ nose for inauthentic experiences.  But good gamified design never does that, and I haven’t really seen many examples of sports teams, teachers or parents giving out hundreds of awards to children throughout a season or semester. In fact, most of the successful competitive systems I’ve researched – whether in the digital or physical world – use achievements sparingly, but heavily weighted toward the early days.

Consider something like dog breeding competitions. To get to the Westminister Dog Show – the main event of a breeder’s year – dogs often compete in dozens of neighborhood, local, regional and statewide pageants. At each step, the field is narrowed and the competition gets more challenging. There is also a ribbon to be won. By the time a dog gets to New York for the big event – even if they are at the bottom of the rankings – they may have accumulated literally hundreds of ribbons. Those achievements don’t diminish either the quality of the results in the contest or the drive of owners and handlers to be the best. What they do is effectively mark progress in a meaningful way.

And that’s the other missing piece of Merryman’s argument – meaning. If a system is meaningful, then the rewards offered are also valuable – no matter how many there are. Consider badges in scouting or the military. To those of us outside the system, the badges seem excessive and possibly pointless. To those that believe strongly in the values of the organization, the badges/trophies are very very important: they signify meaningful achievement and status.  And because meaning can’t be easily determined until you’re invested in a system, that early achievement trophy might be all the more important. It helps ensure that you get past the first hump and figure out if you care.

If teachers, parents and coaches were running around giving out meaningless achievements to kids for every little activity in a system, I’d agree that Merryman had a point. But I think this is a tempest in a teapot. Early achievements are clearly important for driving participation, and if they are part of a meaningful experience (which takes time to develop for each individual), then giving out hundreds of them might not be a bad thing.

However, if we demonize trophies because we believe that they are making kids afraid of failure or squelching their internal drive for fulfillment, then we are throwing the baby out with the bathwater. Achievements, trophies and badges form an important part of motivational systems – and they always have. Instead of judging them as inherently good or bad, Gamification asks us to see them as part of a well (or poorly) designed system. If we want more kids to engage in an activity – learning or athletics, say – then our best shot is to design the whole experience with better motivational dynamics in mind. By focusing on individual player motivation and using the right game mechanics in the right ways, we can drive amazing results.